White Pine and the Woods of Northern Wisconsin

You can still find many buildlings up here constructed using a 'log-cabin' technique, that is: piling up full logs to form the walls of a structure. While the original log-cabins in this country were mostly built as part of logging camps or the homes of poor farmers - this method of construction spread to wealthy summer homes and lodges by the late 1800s and early 1900s. Today, log cabin style homes are still quite popular and you can even buy log-cabin 'siding' that mimics the look of the traditional materials. While our new high-performance cabin is most certainly not a log-cabin, we are still very interested in the history of the region and have tried to integrate certain aspects of the material culture here into the new house in several ways.

One way we're trying to do this is through a generous use of traditional white-pine as an interior and exterior cladding material. All the vertical siding on the house will be stained White Pine and the interior will be almost entirely wrapped in Pine as well, with a simple clear oil applied to maintain as much of the original character of the wood as possible and keep the inside very light and open.

Eastern White Pine, of course, was one of the most important species in the development of this region - and much of the mid-west US as well. White Pine was, at the time of colonization, spread extensively across the eastern and great lakes areas of the US. However, it's now estimated that less than 1% of these original tracts remain, due to extensive logging starting even before the Revolutionary War and continuing until the present day. Most of the largest and highest quality old-growth wood was harvested in the middle and late 1800s however as the railroads and technology allowed loggers to work in areas that would have been too expensive or remote previously.

Originally very valuable to the British as material for the masts of sailing ships, White Pine became a primary building material in the mid 1800s and was used for everything from finish flooring to wall studs and structural beams. A very soft wood, White pine is creamy colored for the most part, with yellowish or sometimes blueish rings and grain figure (the blue often means that the wood was infested with a fungus because the un-milled logs sat for too long in the lumber-yard during the summer months). Pine doesn't have any of the natural weatherproof ability of, say, a Cedar, Redwood or Ipe - but with regular staining it can be used as an exterior siding material just fine. Its very easy to work with and good wood will stay much more dimensionally stable than lots of other similar woods (Hemlock or Spruce esp) - one of the many reasons loggers searched it out disregarding many other species along the way. Distinctively, White Pine contains five needles per bundle (Red Pine has only 2) and the bark is a grey-silver which starts smooth but develops into deep crags as the tree ages.

While the simple fact of existence of such huge forests explains much of the particular history of this region - the history of the logging in Wisconsin is also closely linked to the growth of Chicago and the prairie states. Logging operations in Wisconsin have always been centered around exporting their crop: after all - just cus' you cut is down doesn't make it valuable, you still need to be able to get it to where the market is (which was not in wisconsin). In the central and western parts of the state, the Wisconsin River provided the main thoroughfare to mills and markets downriver, esp. in and around St. Louis. On the eastern side of the state - it was all about Lake Michigan and Chicago. Chicago's growth as the center of the lumber trade coincided with two particular trends, the growth of a market for timber in mid-west and prairie states where trees were scarce but farm-land valuable, and the extension of railroad technology.

Logging operations in Northern Wisconsin before the 1880's were mostly along rivers and streams. These natural highways allowed loggers to harvest and move their timber to Lake Michigan's Green Bay where they would load it onto barges and ships. These loads would then travel to Chicago where they were purchased by national firms and distributed south and west.

Typically, lumber camps would be erected in the late fall, with logging operations beginning during early winter. The frozen ground allowed horse or oxe drawn sleds to move great volumes of timber to the river banks where they would be stored until spring. Once the spring thaw rose river levels, the river drive would move lumber down to small coastal mill towns like Oconto or Marinette. White Pine was especially suited to this technique - Hemlock (another common species in the north woods) was said to float too low in the water to drive successfully, and native hardwoods didn't float at all - making them all but impossible to move from the north woods to the mill-towns.

But with the extension of the railroads, lumber companies were free to range further inland and expand their operations year round (since they didn't have to rely on frozen ground for easy movement). Because Chicago was able to turn itself into one of the most important railroad hubs during the late 1800s - the market there naturally became a vital middle-man between the Wisconsin lumber jack and the Prairie farmer. After railroads began to expand, timber harvesting expanded wildly and soon - like in the rest of the country, virgin White Pine stands began to disappear. The end of the river drive technique also meant that species such as Maple and Hemlock could begin to be harvested in addition to Pine.

A great read on the development of the wisconsin forests and its relationship to chicago is William Cronon's fantastic history: Natures Metropolis.

Sadly, this has left only a very few small areas of original old-growth White Pine left. Yesterday I was lucky enough to be able to go visit one of the largest stands of such forest left in the US - an area called the Cathedral Pines, located in the Nicolet National Forest. 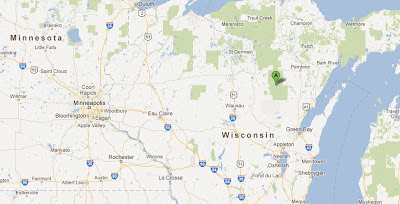 You can see in the areal shot below, the stand is a rough circle - approx 30 or 40 acres of original Red and White Pine and Hemlock - which stands out against the younger growth around it. It is very easy to access and the main trail loop only takes 40 mins or so depending on your speed and ability. There were a LOT of fallen trees though - so if your not up to climbing up or under I wouldn't recommend. 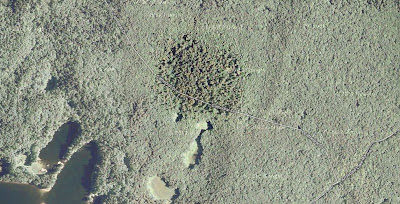 This area around Archibald lake was once a large logging camp for the Holt and Balcom logging company (active here in the late 1800s and early 1900s). Later becoming a summer home of the owner and his wife, Lucy Rumsey Holt, the area of the Cathedral Pines was put aside at Mrs. Holt's request and in the 1960s passed to the state government. Now, the pines represent a tiny snapshot of what the pre-colonial forests covering this country must have felt like.


Almost all of the pines here stand over 120' tall - with several notable specimens over 150' and massively thick. While they haven't been dated too closely - most are thought to be well over 200 years old, with some possibly as old as 400 years. It's a beautiful park and its amazing to think that this might be one of the last areas of a a forrest type that once covered half a continent but now might disappear entirely.


Today - we're lucky to have even a few of these areas left. While we are following in the tradition of building with White Pine and appreciate its importance to this region - the lumber we purchase these days is all harvested locally to the cabin and entirely grown on large plantations or new (less than 100 years old) stands. Thankfully, we have a great lumber company nearby that understands the importance of protecting and managing Wisconsin's forests well. The work of companies like this and the FSC, along with progressive state and federal policies, allows us to continue to use materials that evoke the history and culture of this region without the same catastrophic environmental effects created by historic logging practices.